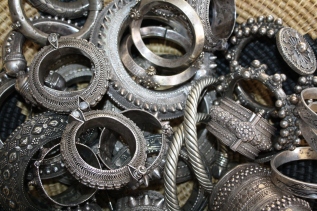 With its long sea border between eastern and western civilizations, Yemen has long existed at a crossroads of cultures. It is strategically located in terms of trade on the west of the Arabian Peninsula. Since 1990 it has been officially known as the Republic of Yemen.
Geographically, the country can be divided into four main regions: the coastal plains in the west, the western highlands, the eastern highlands and desert in the east.
The precious legacy of silver jewelry reflects the ethnic regional diversity of the country. The jewelry in the North was mainly influenced by the Middle East, with styles brought by Turkish occupation in the late 19th century. The southern part, where an estimated 100,000 people of Indian origin live, was influenced by techniques from India.

Yemeni ethnic groups were predominantly Arab, followed by Afro-Arabs, South Asians and a largely tribal society, eg in the northern, mountainous parts of the country where there are already 400 Zaidi tribes. The mid 20th century saw the departure of most resident minority groups (Indonesians, Malaysians, Jews etc.
In addition to local Muslim craftsmen, Jewish silversmiths with their specific jewelry style worked in different locations throughout the country. Craft techniques were mainly loop-in-loop, granulation and filigree which began to appear in late 19th century.
The jeweler would use the mix and amount of silver that fitted the needs of his customer. Bedouin and tribal women in remote areas often brought pieces of low silver content, a reflection of what they could afford. Nomadic jewelry was essentially richer and more differentiated, capable of being transmuted into readily available capital, a reflection of the high risk of their economy.
Ornaments on sale date back to at least the early 20th century showing a high level of granulation and filigree techniques.

Influences of the Middle East and India manifest themselves in Rashaida jewelry.They are closely related to the Saudi Arabian Bedouin who migrated to Sudan from the Arabian Peninsula 150 years ago. Many Rashaidas also live in the neighboring countries of Eritrea.Rashaida keep their traditional dress, culture, customs, camel breeding and practice of Sunni Islam. They are primarily nomadic and live in isolated communities. Besides herding the veiled women also craft jewelry. The men are excellent traders using their camels and nowadays also driving their pickup trucks.

Identical silver jewelry work is found not only in various parts of Yemen but also in Nubia/Ethiopia (as will be indicated in description). Sometimes it is impossible to distinguish Rashaida bracelets from Arabian peninsula counterparts. As Rashaida ornaments also circulate in Egypt, more bracelets can be found under the Egypt heading.

ORNAMENTS ON SALE :  to view more pictures of the ornaments click my E-bay shop

This typical Badihi – style ornament was made with delicate granulation. The bracelet from North Yemen/ Sa’dah is made of two pieces hinged together and a smooth butt on the removable peg . Bracelet is two hinged with a removable pin.Bracelet is two hinged with a removable pin.The silversmith has left his marks at the inside of this ornament – Maria Theresia coin  (MTT 833.3) silver 800 acid tested. Bracelet was not polished to preserve the patina. ∅ inner 5cm ∅ outer 7cm H3.5cm W107g. Similar sample p.56 Silver Treasures p139 A World of Bracelets Price €120

Bracelet NorthYemen/Saada + Nubia/Rashaida. This hinged ornament is double walled and shows various silver decoration techniques : the granulation work is quite delicate. At the inside the silversmith left his marks. Bracelet is two hinged with a removable pin.Maria Theresia coin silver (MTT 833.3) 800 acid tested The ornament was not polished to preserve the patina∅ inner 4.8cm ∅ outer 6.5cm H2.5cm W63g.  Similar sample p.56 Silver Treasures and p139 A World of Bracelets  Price €100

Rashaida/Nubia+Yemen (Al-Dhahiyy )These superb cucumber style armlets have fine chasing and repoussee work. The ornaments are hollow and in very good condition with some creasing/denting due to wearing. They have lovely patina, thus were not polished. The silverbase around 800/1000 acid tested The ornament was not polished to preserve the patina.∅ inner 7cm ∅ outer 12 cmH 2.5cm W 205g. Similar sample page 139/184 Silver Treasures ;  Price € 300

Rasheida / Yemen+ Ethiopia Solid anklets engraved with insignia and crosses, slightly worn away by use, lovely patina. The ornaments were opened between the pommels and show black wax inside. The pair not polished to preserve the patina and silver alloy around 700 acid tested. ∅inner 9x8cm ∅ outer10.5cm H12cm W582g Similar sample p.99 A World of BraceletsPrice €200

Pair of Bracelets Rashaida / Yemen +Nubia The aggressive appearance of this hollow pair, may indicate that the ornaments were designed to protect . They also circulate in other parts of the Red Sea area. Nicely worn and of good silver base made from the Maria Theresa thaler (MTT) 833.3  acid tested ∅ inner 4.5cm ∅ outer10 cm H2.5 cm W210 g Similar sample on front and back page of ” Silver Speaks, Traditional Jewelry of the Middle East “, exhibition at the Bead Museum in Washington, DC, 2002-2003. –  Price € 300